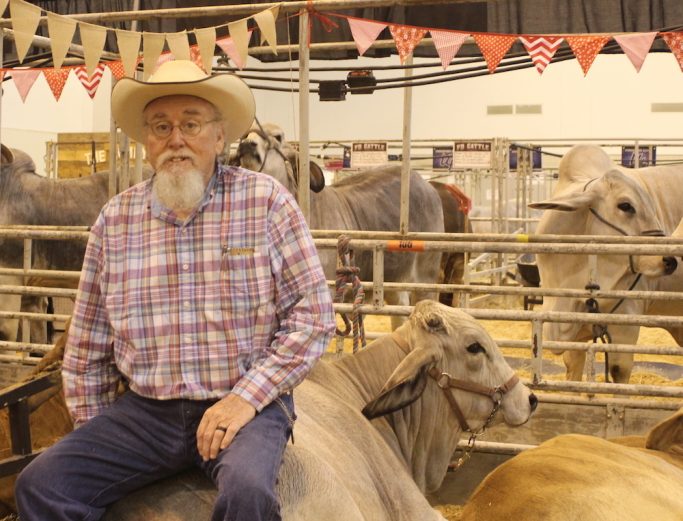 Jim Laurent relaxes with a book in the straw-filled “home” he and his wife share in the cavernous exhibit hall. Their area is tidy and swept, and a crockpot of chili simmers on a cloth-covered portable table. The background noise is a constant and comfortable lull—the bellow of goats, pigs, and cows.

Fourteen years ago, Jim’s daughter, involved in 4H, captured and haltered a calf in this same rodeo’s calf scramble. For city dwellers, picture 100 or so kids chasing a handful of nimble calves around the dirt-covered floor of a professional football stadium. For the fortunate few who drag their haltered—and often uncooperative—calf to the designated area of the arena, they receive money toward their own “project calf.” 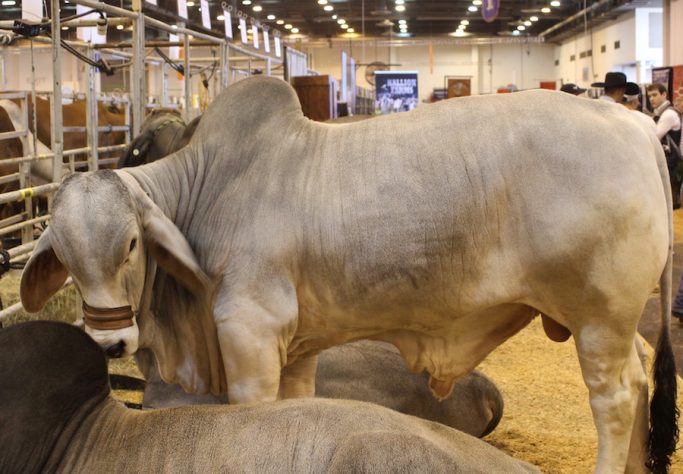 And that’s how it all began.

Now retired from the poultry business, Jim once traveled to farms and advised chicken growers. Nowadays, Jim and his wife make the rounds of southwest livestock shows with their floppy-eared, humpbacked Brahman cattle.

A Vietnam combat veteran, Jim says these docile creatures “soothe his soul” and comfort him.

As I pet Sabine, the 1500-pound gray female at Jim’s feet, I realize Brahman cattle are different from the livestock I encountered as a youngster in the Midwest. With their signature ears and humps, Jim explains his Brahmans are like pet dogs. Each with their own loving personality, they are intelligent and respond well to humans. “I talk to them,” he says with his big grin. “They listen and don’t judge.”

Back at home, on his farm in East Texas, Jim sits in his calves’ “creep pen.” Too small for older cattle, this is an area where babies come to eat their special feed. When the Brahman calves spot Jim heading towards the pen, they race from the pasture to greet him. “When you work with them, they know you,” Jim smiles. Just like a dog, they love to get their rubs and scratches. And it’s good for Jim too. 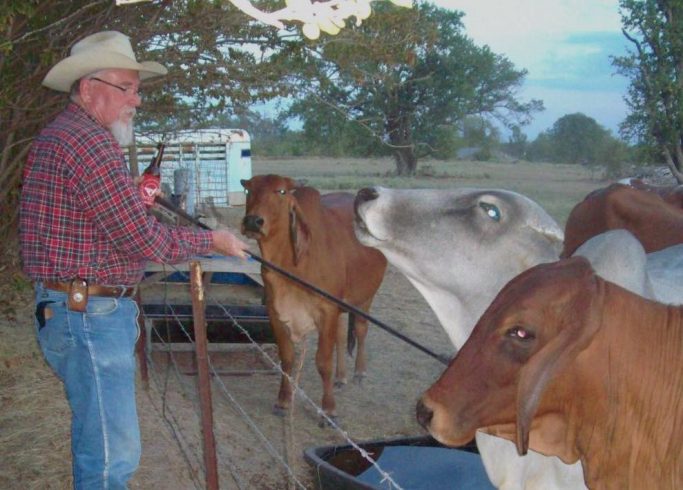 In a perfect world, Jim will sell his cattle to Agriculture kids (4H, Future Farmers of America) for their projects and head back home with an empty trailer. How does he feel about parting ways with his hoofed friends? With his barrel laugh, he says, “That’s what it is all about.”

“Rodeo bulls were once Brahman bulls and gave the gentle creatures a bad rap.”

One of his cattle may bring $5,000-$10,0000. Animals from bigger, fancier ranches will go for as much as $35,0000. After all, this is the International Brahman Show, the biggest in the world. Breeders from South America, Mexico, and Thailand will buy and ship the cattle to faraway countries and breed them. 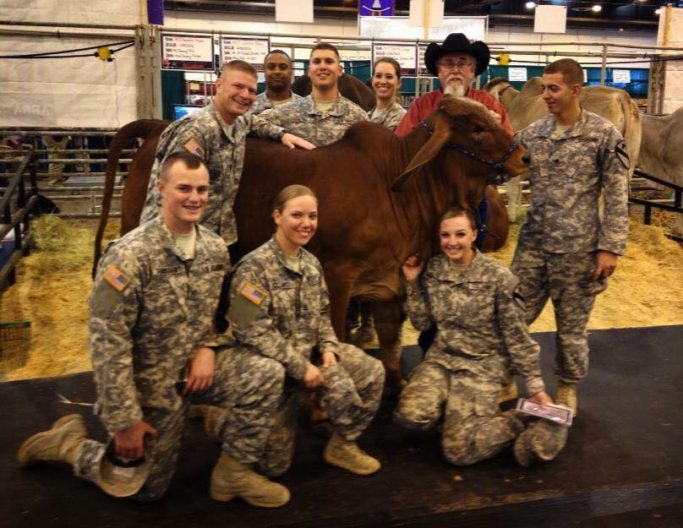 With a new theme every spring, Jim’s wife and daughter have fun naming the new calves. Jim points out Boone’s Farm and Chianti lounging in the straw, the products of a “wine year.” Roaming their ranch are cattle named after the Game of Thrones series, the musical Hamilton, and Texas rivers. Christian Grey and Anastasia Steele, from 50 Shades of Grey, were big barn favorites when they came to Houston a few years ago. Jim laughs when announcing this year’s theme—Famous Texas Democratic politicians!

According to Jim, the Brahman’s hump is a combination of muscle, tissue, and fat. People sometimes, most often outside the US, cook the meat—low and slow, like brisket.

Jim’s daughter, now grown and working in San Antonio, TX,  funded her Bachelor’s and Master’s degrees at Texas Tech University with scholarship money she earned showing her family’s beloved Brahman cattle. This year ALONE, the Houston Livestock Show and Rodeo has committed more than $26 million to scholarships, the calf scramble, youth exhibitors, and other educational programs.

This is the purpose of the huge extravaganza year after year. As Jim put it so well, “That’s what it’s all about.”

You may also enjoy reading about an adorable dog who photographs for a cause and how to give without expecting anything in return. 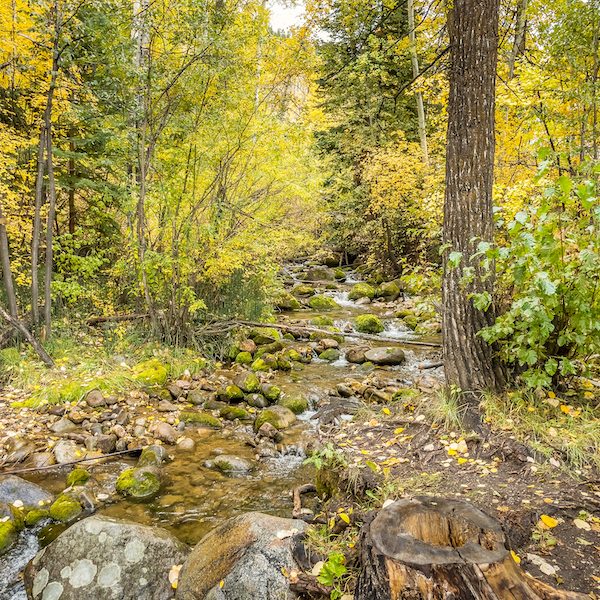 A Trip to Beaver Creek, Colorado

Beaver Creek consistently ranks as one of the top ten… 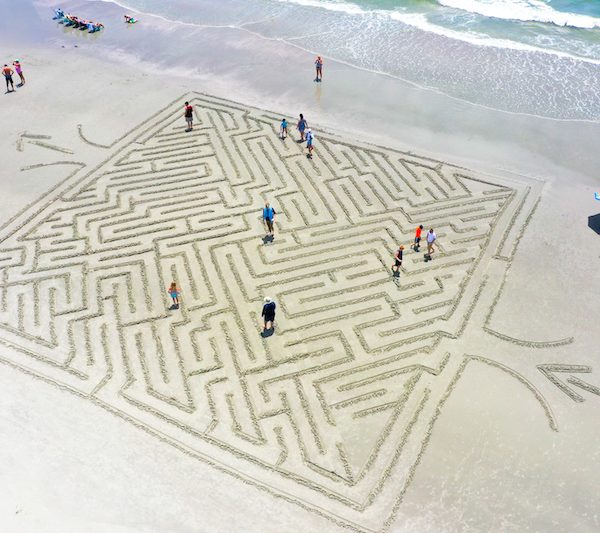 Continue reading...
2 Discussions on
“Jim Laurent and His Brahman Cattle”